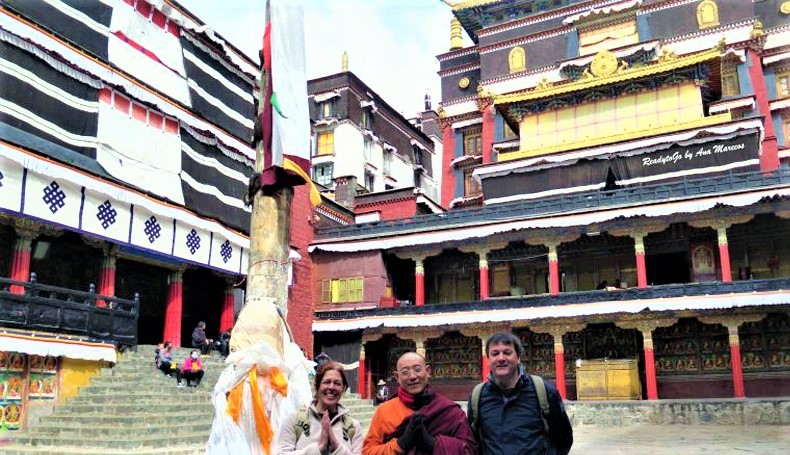 7 Night 8 days Lhasa tour is sacred and the land carrying historical importance since ancient times, of course, will offer the travelers a miraculous insight into the life, civilization, culture, and religion of the local people. The Tibet ancient monasteries were coated with sacred prayer flags and the holy monks offering prayer at the shore of tranquil Lake Yamdrok. The true lovers of nature find Yamdrok Lake an awesome gift of nature. Those who choose the 7 Nights 8 Days Lhasa Tour will definitely find it rewarding and a spiritual journey for a lifetime in the lap of the Himalayas including the top of the world, Mt. Everest. Not only has this trip let you experience the Buddhist cultural sites in the holy city, Lhasa but also the travelers will have the opportunity to witness the majestic mountain view of the mountain of Nepal. The major highlights of this tour are a visit to monasteries like Gyantse, Shigatse, Sakya Monastery, Everest base camp.

This trip commences with a scenic flight from Kathmandu to Lhasa and you will be accompanied by an English-speaking guide to visit different monasteries like Pelkor Monastery,Tashilhunpo Monastery, Rongbuk Monastery, and Gyantse and Shigatse. Finally, you will be taken to the Everest Base Camp trek for the Tibet side.

Arrive in Lhasa either by flight or train. Tibetan guide will greet, receive you there drive to your hotel. You may view the Yarlung Tsangpo river/Bhamaputra River(The Longest and largest river in Tibet)and the Lhasa River on their way to Lhasa. Take a rest to acclimatize in high altitude after check-in hotel. It is also possible to walk around Potala Square and get amazing photos of the Palace . Overnight in Lhasa.

Breakfast and sightseeing tour first visit the Polata is the winter palace of the Dalai Lama. Tibet Potala palace has 1000 chambers, the gilded burial stupas of formal Dalai Lamas and meditation cave of the 33rd great king of Tibet. After lunch, tour to Jokhang temple built bt the 33rd great king of Tibet in the 7th century to promote the Buddhist religion. Barkhor Street Id the local Tibetan street around Jokhang temple, you can walk with pilgrims and locals, and shopping local Tibetan souvenirs there.

Breakfast and continue the Lhasa tour to visit Drepung monastery, one of the great three” Gelug monasteries of Tibet built in 1416 by jamyang choge ,one of the Tsongkhapa’s main disciples. Ganden palace used to be Dalai Lama’s palace in the Drepung before he moved to the Potala Palace .In the afternoon ,we visit Sera Monastery, one of the “great three”Gelugpa monasteries of Tibet built in 1419 by Jamchen Chojey ,one of the Tsongkhapa’s main disciples.The Monks debate at around 3-5 in the afternoon is tha main attraction of Sera Monastery.Stay overnight in Lhasa.

Breakfast and to Shigatse cross over the Kambala pass (4790m) with the view of Yamdrok Lake (4400m) is surrounded by many snow capped mountains. Lunch in Gyantse,the third largest historical city of Tibet,and visit the famous Pelkor Monastery and Gyantse Kumbum here ,and then continue drive to Shiatse ie the second largest city in Tibet .You will visit Tashilunpo Monastery ,the seat of Panchen Lama, the second largest incarnation lama in Tibet .Stay overnight in Shigatse.

Breakfast and drive to Rongbuk monastery Everest via Lhatse ad shegar ,the small town we stop for lunch.The view of the Mount Everest can see in the distance if the weather is clear from Sheger.Driving on the way to Rongbuk Monastery ,we will cross one of the highest pass in Tibet called Pang La pass (5050m)that offers the top five highest mountains in the world including Mt.Everest ,Makalu Cho Oyu, and Shisapangma.Stay overnight at tent or Rongbuk monastery guest house.

Morning enjoy the sunrise on the top of Mount Everest,and it’s magnificent full view standing likea snow capped pyramid in front of you at Rongphu .This is the vantage point to see the grand view of Mount Everest .Breakfast and you may trek to Everest Base Camp 4km one way.It is also possible to go by local bus.After base camp ,you can visit Rongphu Monastery which is the highest monastery in the world (5000m)and belongs to Nyingma sect. After that we drive back to Shigatse,and stay overnight in Shigatse.

Today, we will drive back to Lhasa on the friendship Highway. The whole distance is almost 280km and it takes 6 hours along the Brahmaputra River, the longest and largest river in Tibet. Stay overnight in Lhasa.

Breakfast and Tibetan tour guides will transfer you to the airport or train station and help you get inboard. Say goodbye to Tibet Himalayas and Lhasa.

I went on this  Tour with my colleagues. We had an amazing time on the Lasha tour  with our guide. we went above and beyond to ensure we had the best time possible. We found their website very helpful and decided to know more about it by mail. We booked this tour and it was worth it. The pricing is also fair. They were really active and informative. They really took great care of us and helped us to succeed in our tour. It was really adventurous and thrilling. The panorama view of the mountain was breathtaking. We were lost in the natural beauty of Tibet. We are hoping to do our next trek with Magic Expedition and tours. The entire journey of our trek was so amazing. All thanks to Magic Expedition and tours. Definitely recommended!!!!