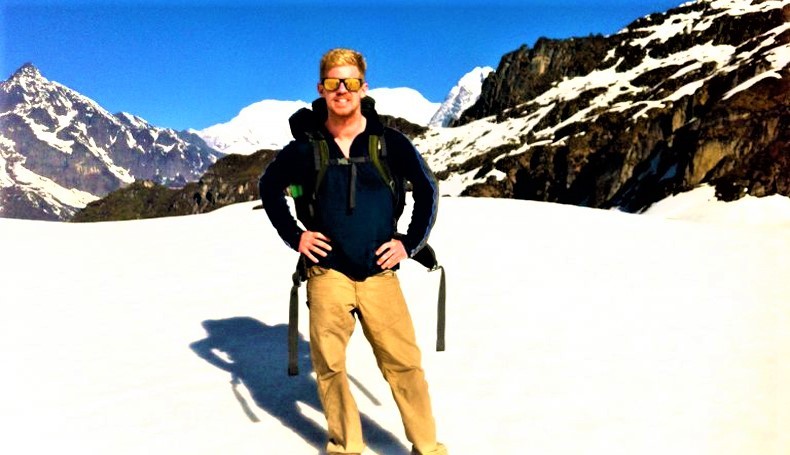 Makalu Base Camp Trek is inviting the adventure enthusiasts around the world begin famous as a wilderness and less spoiled trekking trail in Nepal. Being popular as the world fifth highest mountain peak in the world, Mt. Makalu lures thousands of trekkers every year in Nepal. Undertaking a trekking trip along less beaten trails and unspoiled nature will be an awesome experience. Most importantly, experiencing various species of himalayan flora and fauna and capturing stupendous mountain summit including the majestic Mt Makalu and Mt. Everest will be the lifetime achievement during Makalu Base Camp Trek.

Begin your Makalu Base Camp Trek from Tumlingtar.  About an hour scenic flight from Kathmandu connects Tumlingtar. We further take another 3-4 hours drive from Tumlingtar to the place called Chilchila to start official trek. The trail, now, passes via picturesque traditional settlements and dep woods. Trekkers , now, begin to celebrate core wilderness amid natural water falls, deep rhododendron, high pastures and magnificent landscapes. You will trek miles away from the hectic modern cities and celebrate a complete freedom in one of the most rugged parts of Nepal.

Makalu Barun National Park or Makalu Barun Protected Area is another attraction of Makalau Base Camp Trek. This protected area was officially announced as national park in 1992 which includes spectacular Barun Valley. Rhododendron and orchids are very popular species of plants in this national park. Snow Leopard, Red Panda, Musk Deer, Wild Boar, Wild Yak, Himalayan Thar are some of the endangered species of wildlife to be found in Makalu Barun National Park. This protected are is also famous for wide variety of species of birds. The legendary Barun river which most of our Makalu Base Camp Trekking trail shapes.

Makalu Base Camp Trek is also taken as an adventure trekking since it passes through some of the high passes including Shipton La, Keke La and spectacular freshwater lakes such as Kalopokhari.We also experience Arun River, the river that flows from the highest elevation of the world. The prominent mountain views during your Makalu Base Camp Trek are Mt. Everest, Mt. Makalu Mt. Lhotse, Mt. Chamlang, Mt. Baruntse and spectacular mountain summits glittering with white snow.

Trekkers require obtaining special area permit for Makalu Base Camp Trek since it is a restricted area trek in Nepal. Also trekkers are to be with prior trekking or hiking experience because you are going to above 5000m which is not easy.

Our representative will be there at at the arrival of the airport to receive you. As soon as we receive you, we will transfer you to the hotel. It is around 30 mins drive from the airport to the hotel. There may some hassles like offering taxi or hotel or something like that. Do go with them. And sometimes, in international flight, your luggage may be missing. Be very careful. We hope it will not disturb your trip.

After your arrival at the hotel, you will get refreshed and we will have a short orientation meeting regarding the trip. We will introduce a guide or trip leader. For this, be with 4 pieces of recent pp sized photographs, the copy of passport and copy of travel insurance

This city tour tour begins after breakfast at around 8.  Your lunch will be managed by your guide. So, bring some money with your for personal expenses and for the lunch,  Nepali currency recommended. We go to visit historical cultural heritages like Swoyambhunath, Kathmandu Durbar square, Buddhnath, Pashupatinath which are enlisted in UNESCO World Heritage sites.

Today’s flight takes us from Kathmandu to Tumlingtar. We will join our crew at Tumlingtar. From, Tumlingtar, we drive to ChiChira for 3-4 hours. Chichira is a beautiful Gurung settlement. Then, we prepare for the next day’s trek. Overnight at Chichira.

Today is the beginning of our Trek to Makalu Base Camp. We head to Num after having breakfast at Chichira. We slowing get into picturesque traditional settlements and deep forest. Num village is located at the ridge of the mountain which offers us great views. Overnight at Num.

In our today’s trekking, we first encounter with a steep descent through lush forest and terraced farmland which takes us to Barun River. After crossing the river, we have an ascent on the other side. We further trek in the shades of the trees. Slowly, we begin our trekking in Makalu Barun National Park. We register our permit and we camp at the top of the village. Overnight at Seduwa.

We begin today’s trek after breakfast. Initially, we pass a  ridge formed by two small rivers.  Next, we pass through picturesque villages and beautiful terraced paddy fields. We enjoy the views. We, further,  walk and finally get to the village of Tashi Gaon. Tashi Gaon offers us magnificent mountain panorama. Overnight at Tashigaon.

Relatively, we have the tougher day today because we are going to encounter with the steep trail in higher elevation. We have an ascent to the stream and then to the ridge. We have the more steep trail from here. We trek passing incredible pastures and stone stairs which takes us to a small lake. Now, we have an easy and short trail to Khongma Danda. Overnight at Khongma Danda.

Today, we first encounter the summit of the Shipton La Pass. We need to work for a few hours for this. We pass a beautiful lake named Kalo Pokhari and again head to KeKe La which is located at 4170m high. We can witness magnificent views of Chamlang Peak and other alluring snowcapped peaks in the horizon. After our venture through Keke La Pass, we have a descent through the beautiful settlement which finally takes us to Dobate. Overnight at Dobate.

We first pass through lush rhododendron forest which takes us to Baruna River. Relatively, this part of the trail is steeper and we have to be very careful while passing this trail to the valley. Next, we will have a beautiful walk which finally takes us to higher elevation slowly and get to Yangri Kharka.

Today, we have an opportunity to walk through beautiful yak pastures, deep forest, and picturesque fields. We pass Merek and continue further walk to our final destination Langmale Kharka which offers us incredible mountain panorama. Overnight at Langmale Kharka.

Today is the most important for us because we are getting our final destination, Makalu Base Camp. From Langmale Kharka, we first head for Shershong and finally to Makalu Base Camp. It is 6-7 hours walk. We will accompany with magnificent mountain panorama. Mt. Makalu will be dominant throughout today’s trek to Base Camp. At the base camp, we will be surrounded by panoramic mountain views.

This is the day for Makalu Base Camp Exploration. Mighty Barun Glacier is dominant today. We view the south face of Mt Makalu and also a panoramic view of Everest and Lhotse. We further explore glaciers, lakes and the surroundings. We have the really blissful moment for accomplishing our trip. Overnight at Makalu Base Camp.

Today is the first day of backtracking. We descend all the way down from Makalu Base Camp. We still are fascinated by Makalu. We pass through Shershong, Langmale Kharka, Merek and descend down the valley eventually stopping at Yangri Kharka. Overnight at Yangri Kharka.

We walk through the lush forest, falls, beautiful valleys and the settlements heading towards Dobate from Yangri Kharka. We later follow the Barun River and finally get to Dobate. Overnight at Dobate.

First, we have a steep climb form Dobate to Mumbuk or also called Nambuk. We walk through firs and rhododendron. We pass Keke La, Tutu La, and Kauma La. Finally, we have a descent to Kingma Danda. Overnight at Khongma Danda.

We further have descent today. We have a long and steep descent through the hillsides. We pass through the dense forest. And finally, this trail takes us to the beautiful traditional Sherpa settlement of Tshingaon. Overnight at Tashigaon.

Today, we trek out of the Makalu Barun National Park. We descend down to the Barun River. We pass through beautiful hills and villages. Our further walk finally takes us to Seduwa-Overnight at Seduwa.

We leave Seduwa and trek through lush forests towards Num. The trail goes up and down and passes through dense forests and Sherpa villages as we move downwards. Overnight at Num.

We trek passing Chichira. This is the final day of our Makalu Base Camp Trekking. We trek via a beautiful settlement and have the final glance of Mt. Makalu and get ready for the next day flight to Kathmandu. Overnight at Tumlingtar.

Today, we fly to Kathmandu Airport from Tumlingtar. It is a 50 minutes flight. We check in the hotel in Kathmandu and relax in the afternoon and evening.

Our Nepal trip comes to the end today. We end our trip by dropping you at Kathamndu airport for your international flight.