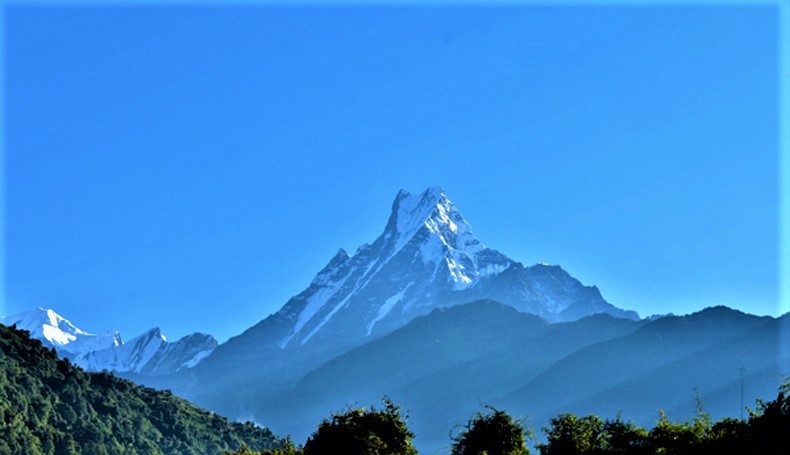 - Pokhara valley and its natural and cultural blessings like lakes, caves, falls and temples

- Pleasant walk via lush rhododendron and other vegetations

- Experience of core Remoteness and wilderness

- Annapurna Conservation Area, the largest conservation area in the world, and its diverse species of flora and fauna

Mardi Himal Trek is popularly famous as a hidden gem in one of the most popular trekking trails in Nepal. It is located to the East of Annapurna Base Camp trek.

Mardi Himal Base Camp itself offers you spectacular views of snow-capped mountains in the Annapurna region. Your climb to the summit of Mardi Himal trekking  (3-4 hours)  will be more rewarding. It offers more fantastic and stunning mountain panorama.

It is one of the perfect vantage points to witness breath-taking views of Himalayas closer up in the horizon. The classical Mardi Himal trek takes you to a mysterious lap of the mountain where Annapurna South, Mount Machhapuchhre (also known as Fishtail) and Mount Hiunchuli will warmly be welcoming to be seized with your eyes and camera as well. Itinerary also easiest,

As other trips to Annapurna region, Mardi Himal trekking also commences after a short and scenic drive from Pokhara to Phedi. Pokhara itself offers you some amazing experience of natural splendor.

The trails then ascend along the small winding path through the various deep forest.  Especially, beautiful rhododendron will be more beautiful during March and April.

since the entire hill will be reddish with flowering rhododendron. Then, you will begin to experience rugged mountain landscape with some amazing mountain views including ‘a hidden gem’, Mardi Himal, Annapurna South, Mount Machhapuchhre (also known as Fishtail) and Mount Hiunchuli.

Our representative will receive you at the airport. You are greeted by our team and transferred to the hotel. People may be offering taxi and other help to you at the airport, in this case, you are suggested not to go with them. Sometimes, you will be in trouble. Take good care of your luggage while coming out of the airport. After you arrive at the hotel, you will get refreshed and we will have a short orientation about the trip  you are going to join from the next day. You are briefed on the preparation and the required equipment from your trip.  During this short meeting, we will let you know your guide too. -Overnight in Hotel

This Kathmandu city sightseeing tour begins after breakfast at around 8. This city tour takes you to the major religious and historical sites  including Swoyambhunath, Kathmandu Durbar Square, Bouddhanath, and Pashupatinath which are UNESCO World Heritage sites in the Kathmandu  valley.  Your guide will tell you everything about these site you visit today. We end this city tour  between 3-4 pm-Overnight in Hotel in Kathmandu.

It is a 25 minutes spectacular flight from Kathmandu to Pokhara. The domestic airport from Thamel is 30 mins drive. After we arrive in Pokhara, you will go for a city sightseeing tour. Your guide take you to visit David Falls, Fewa lake and  holy Gupteswor Cave. Enjoy the evening walking  in the street of Lakeside and have the dinner in your favorite restaurant. Overnight in Hotel in Pokhara.

It takes one hour to get Kande from Pokhara. Now, we begin our walk from Kande . This is the beginning point of this trek . We climb all the way up till we get Australian Camp. Optionally, we can trek to Pothana from Phedi via Dhampus. Have lunch at Australian Camp and enjoy the mountain views including Annapurna massif and Machhapuchhre. The trail, next is via lush woods, is mild for you till you get Pothana. Walk via lush rhododendron and other woods. Today’s trek ends with your arrival at Pothana. -Overnight in Lodge

The trail, initially, is flat passing via traditional settlement including Landruk.  From Landruk, you will walk all the way up till you arrive at Forest Camp. The trail , now, turns to be steeper but you will enjoy the walk via birch, rhododendron, mountain oak, maple, hemlock etc. You will also capture magnificent  view of Annapurna II and other snow fed mountain summits.  Overnight in local lodge in Forest Camp.

The trail, today,  turns to be steeper than the previous day. However,  you will fully enjoy this spectacular adevnturous walk into the core wilderness which will delight you every pace of your trek. You will be trekking again through beautiful Himalayan flora including the tree fern and orchid forests, Modi Khola valley. Overnight at Low camp at local guesthouse (3,400m.)

Relatively, the trekking today is tougher to climbing steeply up out of the forest crossing the tree line. Hydrate sufficiently prior to today’s walk. However, the climb will totally be pleasant. Overnight at Camp (4,100m.)

This is the special day for exploring the entire surrounding. You will trek up to the (4200m.) altitude from where you witness the spectacular glimpse of the Mountain peaks including Annapurna, Dhaulagiri, Machapuchare and many alluring snow-fed summits. The mountain views and exploration of the region will be marvelous for today.

We are following the new trail today till we get Sidding Village. This is a walk through the picturesque terraced fields and beautiful traditional settlements exploring the region further. The trek today is all the way down to Sidding village. Overnight in Lodge- (1,700m.)

Day 10: Trek to Phedi and drive back to Pokhara

Today, you will be walking through beautiful pastureland, ethnic Tamang, and Gurung villages. On the way you will enjoy Annapurna and Machhapuchhre. Spend Within hours on walk, soon, you will get the road at Phedi and from where you take private van or jeep or car to Pokhara. It is a one-hour drive from Phedi to Pokhara. Enjoy the evening at your favorite restaurants and celebrate the victory of your adventure trip. Overnight in Hotel

Day 11: Drive back to Kathmandu.

In the evening, our team will offer you a cultural farewell dinner to end this trip beautifully.  Overnight in Hotel in Kathmandu.

According to your flight schedule, we will drop you to the airport for your onward flight towards your country or next destination.

If you are planning to do Mardi Himal. You need to drive 200km from Kathmandu that will take an 8hrs drive to reach to Pokhara. And from Pokhara again drive to Nayapul. So Nayapul is the gateway from where you will step up to Dhampus.

To go to trekking means you are visiting the remote area so please do not expect every trekking route you will get luxurious room same as in Kathmandu and Pokhara. During trekking, you will sleep at the Tea House. The Tea house means normal Local Lodges. where you will get a normal Bed, Blanket, and Common Bathroom. Even for a hot shower also need to pay extra.

During Trekking in Nepal. Most of the places you will get Local Foods like Nepali Thali ( Dal Bhat), MoMo, Chowmin, Thukpa, Fried Rice etc and some international food Like Spaghetti, Macaroni, Pizza, Pan Cake, Fried Eggs etc you will get according to the menu. In drinks you can get Local Tea, Coffee, and also even if you request for the water to drinks need to pay extra.

Highlight Of The Trekking:

Our experiences with Magic Expedition Tours was wonderful. They were very responsive to all of our queries. The provided clear information about Mardi Himal Trek. We were 14 people including our group leader. We spend 2 nights in Kathmandu. We also did Kathmandu valley sightseeing. We went there during the spring season. The sky was clear and blue. The forest was looking vibrant because of the blossoming Rhododendron. At night it was cool. All the permits including the ACAP and the TIMS card were managed by the trekking company. One of our group members had knee problems while walking in the steep. I recommended if you have such a problem then bring kneecap. We also engaged with the socio-culture and lifestyle of the Magar and Gurung ethnic. The guide provided much information about the trek and their country. The company took great care of us as well as our belongings. Overall the trek was really fabulous. We really liked the trekking company as well as their service to make our trek wonderful.

Our trek was really nice. The trek was organized by Magic Expedition Tours. We booked this trek with a private guide. The guide was really helpful. We were provided essential gears from the trekking company itself. We didn’t have much Nepali currency so we exchanged the day before our trek the trekking office. The gear that we were provided was clean. The Mardi Himal trek had beautiful scenery and the walking environment from the start. The trek route was nice and also not so crowded. The company took care of everything very smoothly. The surrounding of the snow-capped mountains was so beautiful. We loved the local food Nepali thali (DaalBhat) very much. It was really delicious. We also saw rhododendron on our way. We really enjoyed the tea house. They behaved like their own family. There will not be much altitude problem but steep slope are a bit difficult. We had the best memory in Nepal till now. If I get a chance I would definitely to another trek from Magic Expedition Tours.