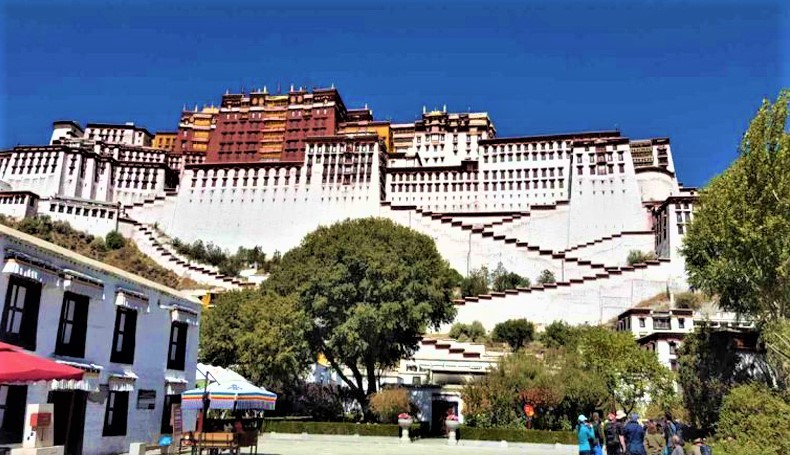 Tibet Overland Group Tour is a spectacular tour of the highest plateau of the world experiencing the exotic natural phenomenon. Connecting Nepal to Tibet, Tibet Overland Tour is exciting to pass high plateaus, panoramic landscapes, holy and historical caves, monasteries, and magnificent mountain views including Mt. Everest, the top of the world, and other alluring mountain peaks. The drive into the heart of Tibetan plateaus is a lifetime achievement in this tour.

Tibet Overland Group Tour commences with a drive from Kathmandu. We drive to the border of Tibet celebrating exotic landscapes and mountain views. We arrive at the valleys of Kerun and Xegar experiencing deep gorges, waterfalls, and high mountain flora and faunas. We will witness alluring mountain views including Mt. Cho Oyu (8201m), Mt. Xishapagma (8012m), and Mt. Everest.

We also tour the major attractions of Tibet like Lhasa, Gyantse, and Shigatse. These three places are the most prominent destinations of the Tibet Overland Group Tour. Further, we will be exploring many other magnificent monasteries and historical sites including  Tashilunpo and the Kumbum, which has marvelous sculptures and murals.

Tibet Overland Group Tour encompasses two days sightseeing tour in Lhasa, the spiritual and secular center of Tibet. The ancient heritage and architecture of Lhasa are awesome. Lhasa has many tourist attractions like Potala Palace, Jokhang temple, traditional Barkhor market, and Drepung and Sera monasteries. These heritage sites tempt thousands of tourists from around the globe each year.

At the same time, we experience the nomads herding their yaks in the Tibetan Plateau. Finally, the scenic flight again offers us some breathtaking views of mountain panorama including the top of the world, Mt. Everest, and other summits.

Day 01:Arrive In Kathmandu Transfer To The Hotel

We take a drive early in the morning to the Nepal Tibet border, Kerung with bus or jeep. The drive is via the beautiful setting of the countryside. We complete some formal procedures at the immigration at the border and continue further drive to Kerung. Overnight at Guesthouse at Kerung.

We, today, experience all the way uphill into the highest Tibetan plateaus and magnificent landscapes and mountain views. Mt. Cho Oyu, Mt Xishapagma and other alluring summits are breathtaking today. Upon our arrival at Tingri, we witness the top of the world, Mt. Everest. Overnight at the guesthouse at Tingri.

Our further drive into the core Tibetan plateau will really mesmerize us today. Crossing over Gyatchu La (5,220M), the highest pass which takes us to Lhasa via Lhatse from where the road to Mt. Kailash divides to West. Finally, we arrive at Xigatse and stay overnight at the guesthouse.

Today, after breakfast, we do a short sightseeing tour of Shigatse. We visit Panchen Lama’s Tashlhumpu Monastery. Then, we will drive to the valley Gyantse via picturesque Tibetan valleys and settlements. Here, we visit various fortresses representing ancient history and civilization. Overnight at the guesthouse at Gyantse.

We spend around 7 hours on the drive from Gyantse to Lhasa. One the way, we encounter with The Karo La and Kamba La pass. Similarly, we see Lake Yamdrok Tso and Brahmaputra River as well as other incredible landscapes. On the way to Lhasa when we get to the main road from Kamba La Pass, we see Potala Palace at the distant view. Overnight at the guesthouse at Lhasa.

Today, we have several interesting sites to visit such as Sera Monastery, the Norbulinka and the summer palace of Dalai Lama. These all heritage sites represent ancient art, history, civilization and the religious cult. The Tibetan carvings and paintings can be observed in this visit. One of the most significant nightlights of today’s visit is murals. Besides, we also see Thanka and tapestries. Our visit to Jokhang Temple makes us realize that Tibet is really rich in culture and civilization. Overnight at the guesthouse at Lhasa.

Today, we will visit the magnificent attractions of Lhasa: Potala Palace and Drepung Monastery. Potala Palace is one of the most amazing architectural wonders of Tibet with fascinating murals and statues. The amazing Thanka paintings and images crafted representing the civilization of hundreds of years back is marvelous to explore. Similarly, the Drepung Monastery which was founded in the 14 century giving shelter more than 10000 monks, is the identity of Tibet. We see this wonderful monastery and explore it. Overnight at guesthouse or hotel at Lhasa.

Your transfer to the airport in the early morning and we will have an hour-long flight to Kathmandu. On the way, we cross marvelous mountain panorama including Mt. Everest and Kanchenjungha. After your arrival at Kathmandu, you further forward to your destination.