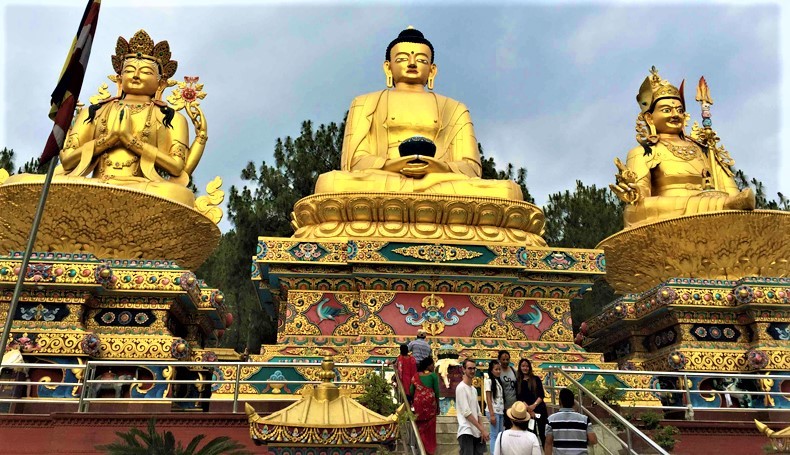 Magic Expedition Summer Tour offers an opportunity to explore the major Buddhist religious places including the birthplace of Gautam Buddha. Buddha was born in 632 BC in Lumbini so Lumbini is worldwide recognized as one the most sacred world heritage sites which has been enlisted as a UNESCO World Heritage site. Magic Expedition Summer Tour commences visiting the oldest stupa of Swoyambhunath also known as the monkey temple of Kathmandu and ends at the World Peace Pagoda established by the Buddhist monk Nipponzan Myohoji organization in Pokhara.

Swyambhunath Stupa is also famous for Monkey Temple, the oldest temple or stupa in the cultural history of Nepal's years-long civilization. You will, certainly, feel very delighted and fortunate to visit and explore 200 years old art and architecture here. And also, the Swyambhunath Stupa is the very point within the valley to capture the entire view of Kathmandu valley and some fabulous mountain views. The monkeys with their kids, colorful prayer flags, centuries-old art and architecture, the cool forest in the premises will make this visit more spectacular.

Boudhnath is another attraction of the Magic Expedition Summer Tour. This impressive stupa is located in Bouddha in Kathmandu and it attracts thousands of visitors around the world every year. Buddhist followers consider Bouddhanath Stupa a very special pilgrimage. We also visit the Kopan monastery and Pashupatinath Temple during this tour.

Next, we go to visit Namobuddha:- Buddhist stupa of Namobuddha(1982m.) which is situated on the top of a hillock just above Panauti. It is a legendary tourist destination in the sense that a kind-hearted prince offered himself to a hungry tigress and her five cubs and took the reincarnation of Lord Buddha.

We, then, leave Kathmandu valley and drive to Lumbini:- Lumbini is another worldwide popular as one of the most sacred world heritage sites which have been enlisted in the UNESCO World Heritage site. Lumbini, the birthplace of Lord Gautam Buddha located in the Kapilvastu district, and Lumbini is a small town in the southern Terai plains is 306kms from Kathmandu where Lord Buddha was born in 623 BC in Lumbini. Thousands of Buddhist followers come to Lumbini and after the visit, they themselves feel transcended and enlightened massively.

Similarly, the exquisitely pristine surroundings, serene ponds, centuries-long civilization, and ideology, of course, will let them acknowledge the ecstasy of life here. Lumbini is not merely awe-inspiring for the tourists but also for the learners, archaeologists, historians, researchers, and pilgrims. The notable attractions for the tourist attractions of Lumbini are the Sacred Garden, Maya Devi Temple, Puskani Pond, Ashokan Pillar, Buddha Temple, and Lumbini Museum. Moreover, The Sacred Garden where Buddha was born converges on the Ashoka pillar, which marks an inscription identifying the spot as the birthplace of Buddha. The Lumbini Museum provides an opportunity to observe a huge collection of the Mauryan and Kushana coins, religious manuscripts, terracotta fragments, and stone and metal sculptures from long ago.

We head to Pokhara, finally, from Lumbini. This beautiful city of lake and the mountain gives a completely different taste to travelers. We visit World Peace Stupa, walk around Phewa Lake, and witness the Annapurna range including alluring Machhapuchhre. We take a drive or flight to Kathmandu to end this Magic Expedition Summer Tour.

Day 01:Arrive in Kathmandu transfer to the hotel

We will receive you upon your arrival at the Tribhuvan International Airport. You will find our representative at the arrival of the airport holding placard with your and our company name (Magic Expedition. And then, we will take you to the Hotel. The drive to the hotel from the airport is around 30 mins. You may experience some hassles like offering a taxi or hotel or something like that. Do not agree with them. Take care of your luggage too. We hope it will not disturb you initially.

After you check in the hotel, we will have a short orientation meeting regarding the trip you are undertaking from the next day. Overnight at the hotel in Kathmandu.

Day 02:Explore to the world heritage site of Kathmandu valley

Your sightseeing tour begins with the visit of Swyambhunath stupa, also famous for Monkey Temple, the oldest temple or stupa in the cultural history of Nepal. You will definitely enjoy observing old art and architecture from hundreds of years back. Next you will visit Boudhanath Stupa and Kapan Monastery. What we explore and visit today are Buddhist sacred sites in the valley.

Day 03:Drive from Kathmandu to Namobuddha.

After breakfast at 9.30 am you will be 3 hours' drive to the Buddhist stupa of Namobuddha(1982m.) which is situated on the top of a hillock just above Panauti. It is a legendary tourist destination in the sense that a kind-hearted prince offered himself to a hungry tigress and her five cubs and took the reincarnation of Lord Buddha. Spending 2 hrs at Namobuddha you will be back to the hotel at 4.30 pm.

If you choose a flight from Kathmandu to Bhairahawa, it takes 35 mints and from Bhairawa, it is 30 mints' drive to Lumbini. We can also drive to Lumbini (321 km / 8 hrs) from Kathmandu. For the drive, we either go with private vehicle or tourist bus. Pass Malekhu, Mugling, and Chitwan and we finally get Lumbini. Overnight Stay in Lumbini at the hotel.

Lumbini Tour includes the visit to the Mayadevi temple (birthplace of Buddha) and tour of surrounding areas of the Lumbini Development Trust (LDT). The museums, ponds, beautiful gardens, Ashoka Pillar, and many other religious and historical highlights are incredible to see in Lumbini. .Overnight Stay in Lumbini at the hotel.

Drive and observe religious and archaeological sites located at Tilaurakot, Gotihawa, Kudan, Siddharthanagar, Niglihara, Sagarhawam, and Aurorakot. These sacred religious and historical sites will let you know a lot about Gautam Buddha and Buddhism. Overnight Stay in Lumbini.

Day 07:Breakfast and Drive to the Pokhara.

After Breakfast, you will be 4 hours of scenic drive to the Pokhara. And check in to the Hotel. After an hour rest you will be taken to the World Peace Pagoda, a majestic Buddhist stupa, recognized as a wonderful viewpoint to capture Annapurna range including beautiful Machhapuchhre and mighty Dhaulagiri. The Peace Pagoda also offers magnificent Phewa Lake and Pokhara city. Overnight at hotel in Pokhara.

Rise early and drive up to Sarangkot. Capture mesmerizing sunrise and mountain views include Annapurna Massif, Dhaulagiri, Machhapuchhre, Ganesh Himal, and Manaslu. Drive back to Pokhara. Have Breakfast

Day 09:Drive from Pokhara to Kathmandu – Overnight in Hotel- 7-8 hrs

walk from Lakeside to the bus station located in Pokhara or optionally, the taxi will drop you there. Your guide will be there to help you to get tot he bus station. All the tourist buses leave at 7.30 for Kathmandu every morning. It is 7-8 hours drive today. On the way, you will pass through the country road, river, woods, and local villages . However, we must say, the condition of the road, sometimes, is not good; bumpy and dusty…. To escape it, you, optionally, can go with flight. It is a 35 minutes flight from Pokhara to Kathmandu which is optional and has pay extra.

In the evening, after you get to the hotel, take rest and refresh yourself. Next, we will have a cultural dinner with our team and can exchange the experiences you had during your trip and can feedback us.

Day 10:Drop to the airport.

According to your flight schedule, you will be dropped to the airport for the onward flight towards your country or next destination.