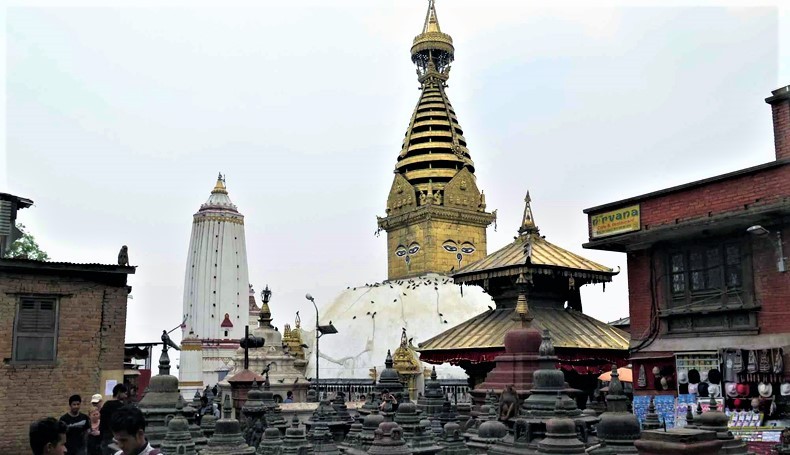 Kathmandu Heritage Tour commences with a significant visit to Kathmandu Durbar square. A visit to medieval cultural and historical sites including palaces representing medieval art and culture will, of course, be an observance of a remarkable historical site for a lifetime. Most significantly, you will have an encounter with Kumari, a living goddess, and will feel blessed after seeing her.

Then the next cultural and spiritual visit to Swyambhunath stupa also famous for Monkey Temple, the oldest temple or stupa in the cultural history of Nepal's years-long civilization. You will certainly find yourself fortunate to observe 200 years old art and architecture and the Swyambhunath Stupa is the very point within the valley to seize the entire view of Kathmandu valley. The monkeys, holy prayer flags, centuries-old art and architecture, the serenity of the forest in the premises.

Boudhanath is another invaluable attraction of the valley. It is the biggest stupa in the world located at Bouddha in Nepal and it attracts thousands of visitors from around the world. Especially, Bouddhanath Stupa is an invaluable sacred pilgrimage for Buddhist followers.

Pashupatinath Temple, a Hindu temple, located on the bank of the holy Bagmati river represents awesome ancient arts and architecture.  This is Shiva’s temple and on the occasion of MahaShivaratri thousands of pilgrims go to visit this time around the world, especially from India.

Bhaktapur is the oldest city among other cities in the Kathmandu valley which is rich in age-old lively arts and civilization. The tradition of observing distinct cultural and historical fares all the year attracts not only international tourists but also attracts domestic tourists. The ancient palaces, museums, cultural and historical fares, and the lively cultural streets and pure cities automatically fascinate the tourists here. The local organic products like yogurt, handicrafts, tea, coffee, pottery, and woodcrafts are very recognized products of Bhaktapur. Changunarayan Temple located on the outskirt of Bhaktapur is another example of art and architecture of the Lichhavi dynasty period, was built by Lichhavi king Mandeb. The pristine surrounding and marvelous art and architecture of the temple will be a memorable experience for a lifetime.

The more sacred and religious city of Patan lets you experience a quite different flavor of tour within the valley. Centuries-long arts and architecture exposed representing Medieval arts and history in a number of temples and palaces. Among them, the most magnificent is the Krishna Temple of Patan. Hindu devotees visit this temple every day in a flock. The distinct arts carved in the woods and stones including in idols will be a marvelous representation of age-long art and civilization.

Pokhara, exclusively a hidden paradise for tourists, is located in the western part of Nepal popular for superb natural gifts within the earth. Abode for a number of serene lakes and the very point to witness extraordinary mountain view mainly entire Annapurna range including popular Machhapuchhre ( Fish-Tail) very close up, Pokhara is obviously a perfect destination for a distinctive day-tour. And the experience will undoubtedly be the once-for-a-lifetime.

A day an outing will be spent astoundingly with stunning and incredible blessings of nature in Pokhara. Other rewarding treks of this region like Ghorepani trek, Sarankot trek, Naudanda, Annapurna Base camp commence from Pokhara.

Exquisitely encompassing the beauty of nature, Pokhara offers a stunning view of snowy peaks and the serenity of the lakes. Among the various attractions in the valley, Phewa Lake is one of the major attractions. The lake Phewa is the second largest lake in Nepal which adds special splendor to the beauty of Pokhara. The different colors of the water of the lake with the different fall of the sunlight let you experience the true calmness of nature. A number of restaurants in the eastern part of this lake not only offer a variety of tastes of dishes but also infatuation with nature. Barahi Temple located in the midst of the lake Phewa is the center attraction of this lake where bird and animal sacrifices are offered. Along with these attractions, boating, sailing, kayaking, canoeing, swimming, bird watching, fishing, and angling are some of the notable activities which you yourself can participate in at Phewa Lake.

David fall is an alluring natural fall located about 2 km southwest of the Pokhara Airport on the Siddhartha Highway. Closer to this fall, there is a holy cave named Gupteswor Cave also known as Gupswor Mahadev which carries a great value for the phallic symbol of God Shiva for Hindus.

Bindybasini Temple is considered to have been built in the 16th century to represent ancient art and civilization. Goddess Durga is worshipped here and sacrifices are offered by Hindus. In addition,  Mahendra Gupha ( cave) and Chamara (bat) Gupha are other attractions for the tourists owing to the number of bats within their walls.

Seti Gandaki Gorge, a wonderful narrow gorge by Seti River can be viewed from Mahendra Pul. World Peace Pagoda, a majestic Buddhist stupa, is recognized as a wonderful sight to be viewed situated on top of a hill on the southern shore of Phewa Lake. It is the point that offers a magnificent view of the Annapurna Range and beautiful Pokhara City.

Lumbini is worldwide recognized as one of the most sacred world heritage sites which have been enlisted in the UNESCO World Heritage site. Lumbini, the birthplace of Lord Gautam Buddha located in the Kapilvastu district, and Lumbini is a small town in the southern Terai plains is 306kms from Kathmandu where Lord Buddha was born in 623 BC in Lumbini. Thousands of Buddhist followers come to Lumbini and after the visit, they themselves feel transcended and enlightened massively.

The exquisitely pristine surroundings, serene ponds, centuries-long civilization, and ideology, of course, will let them acknowledge the ecstasy of life here. Lumbini is not merely awe-inspiring for the tourists but also for the learners, archaeologists, historians, researchers, and pilgrims.  The notable attractions for the tourist attractions of Lumbini are the Sacred Garden, Maya Devi Temple, Puskani Pond, Ashokan Pillar, Buddha Temple, and Lumbini Museum.

The Sacred Garden where Buddha was born converges on the Ashoka pillar, which marks an inscription identifying the spot as the birthplace of Buddha. The Lumbini Museum has a huge collection of the Mauryan and Kushana coins, religious manuscripts, terracotta fragments, and stone and metal sculptures of centuries ago.

Hence, the tour to the birthplace of Lord Buddha is catered to tour enthusiasts with distinctive charm and excitement. A pilgrimage-like tour to Lumbini pleases you greatly.

Considerably popular as a cultural and historical tour, the Kathmandu Heritage tour takes you to those historical and cultural sites within the valley which are enlisted in the UNESCO world heritage site. Students, researchers, innovators, historians,s, and archaeologists any type of tourist will find this tour undoubtedly rewarding for once-in-lifetime is the best to visit Kathmandu Pokhara Lumbini Tours Those keen enthusiasts on Art, culture, history, lifestyle, civilization, and archaeology will have a great opportunity for the innovation of novel perspectives on human civilization.

The valley, Kathmandu includes three ancient cities, Lalitpur, Bhaktapur, and Kathmandu is known as the city of temples and known as a remarkable cultural hub for decades. Age-old temples, monasteries, stupas, monuments, arts, culture, and civilization including historical settlements are notable infatuations of this valley. Most of the heritage sites represent the history and civilization during the ancient Lichhavi and Malla dynasty period and the Medival period in the history of Nepal.

Day 01:Arrive in Kathmandu And Transfer to the Hotel.

This the very first day that you step in Nepal for the trip. You will be received by our representative in the airport. Our representative will be at the arrival holding placard with your and our company name (Magic Expedition. And then, you will be transferred to the hotel. It is around 30 mins drive from the airport to the hotel. There may some hassles like offering taxi or hotel or something like that. Do go with them. And sometimes, in international flight, your luggage may be missing. Be very careful. We hope it will not disturb your trip.

After your arrival at the hotel, you will get refreshed and we will have a short orientation meeting regarding the trip. We will introduce a guide or trip leader. For this, be with 4 pieces of recent pp sized photographs, a copy of passport and copy of travel insurance.

This sightseeing tour commences after breakfast at around 8. You will have lunch during the tour in the afternoon. So, you have better have some money, Nepali currency is expected. For the whole day You will be exploring Kathmandu valley, a valley of temples, major historical cultural heritages like swoyambhunath, Kathmandu durbar square, buddhnath, Pashupatinath which are enlisted in UNESCO World Heritage sites. The tour ends at around 4 pm.

This sightseeing tour commences after breakfast at around 8. You will have lunch during the tour in the afternoon. For the whole day, You will be exploring the Old City of Nepal, Bhaktapur And Patan.

Day 04:Drive / Fly from Kathmandu to Pokhara and Rest In Hotel.

After your breakfast, the leader or the guide will come to receive to the hotel along with Private Car. It takes around 7-8 hours to get Pokhara from Kathmandu. On the way, you will see the winding country road, river, woods and local people and their lifestyle. However, we must say, the condition of the road is not good. Sometimes, bumpy and dusty…. To escape it, you, optionally, can go with flight. It is a 35 minutes flight from Kathmandu to Pokhara which is optional and have pay extra.

This Pokhara Valley Sightseeing tour is Commence after breakfast at 8 am. You will have lunch during the tour in the afternoon. For the whole Day, you will be exploring the famous place which you should not miss it while you are in Nepal. These places are Sarangkot, White Stupa, Gulteswor Mahadev, Devid’s Fall.

Day 06:Drive from Pokhara to Lumbini And Rest In Hotel.

After breakfast, we will drive from Pokhara to Lumbini. The birthplace of God Buddha. The drive will be 5 to 6hrs. Check in to the Hotel and Rest.

After breakfast, The sightseeing tour commences at 8 am. For the whole day will be exploring The Birthplace of Buddha Place where you will visit Sacred Garden, Maya Devi Temple, Puskani Pond, Ashokan Pillar, Buddha Temple and Lumbini Museum.

Day 08:Drive back from Lumbini to Kathmandu.

The drive is 7 to 8 hrs from Lumbini To Kathmandu.

Drop to the Airport.