Nepal is a landlocked country that is surrounded by two giant neighbors, China, and India. Nepal is multi-ethnic, multi-religious, multi-lingual, and multi-cultural with Nepali as its own language. This article will be helpful for you if you are planning to visit Nepal.

Everyone should know some top things to know before visiting Nepal or should have important information about Nepal before visiting it. One is supposed to have information about climate, population/people, religion, foods, major cities, major tourists destinations, etc. Actually, smarter travelers do a lot of research and collect reliable information on the above-mentioned titles beforehand visiting a country or place in order to make their holiday trip memorable and successful. Here, the same thing is applied while visiting Nepal.

We suggest the travelers who are planning to visit Nepal should know some important things so that they can really have a fruitful time while exploring a particular tourist destination. People who are visiting Nepal know about politics, history, religion, people, and major tourists destinations of Nepal so that they do not need to do struggle while undertaking a trip program in Nepal. Now, this article presents some major highlights of Nepal as well as top things to know before going to Nepal. Hope this article will benefit you with the most authentic information about the major highlights of Nepal. 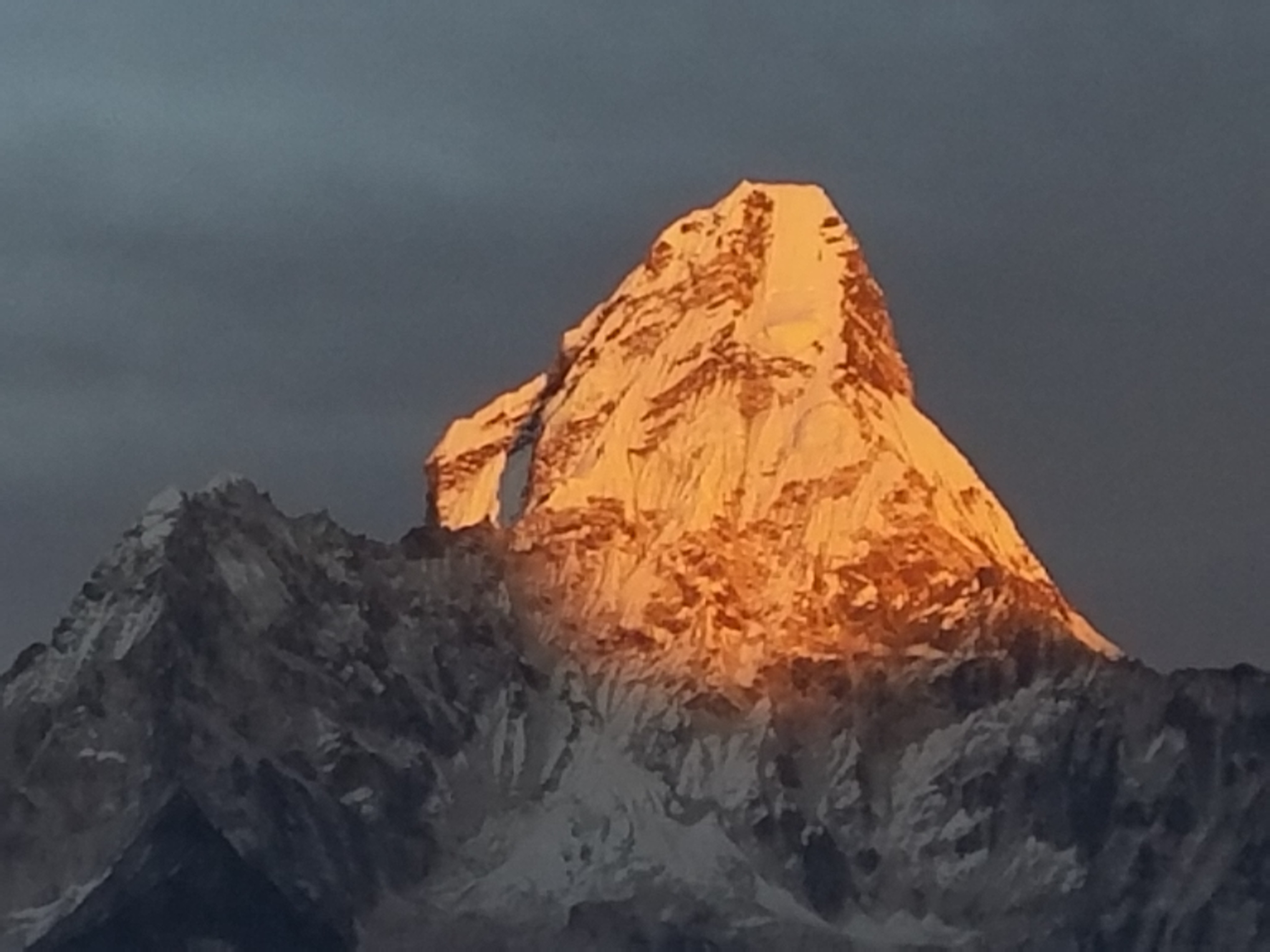 The majority of people are followers of Hinduism and Buddhism in Nepal. However, few people also practice Muslim and Christian. The new constitution of Nepal has declared Nepal as a secular country although the majority of the people follow Hinduism. Recently, the Hindu extremists are demanding to bring change in the constitution to declare Nepal as a Hindu country. But the government is the deaf year to this demand of the people. 81.3% of people follow Hinduism and 10.74% of people follow Buddhism in Nepal. 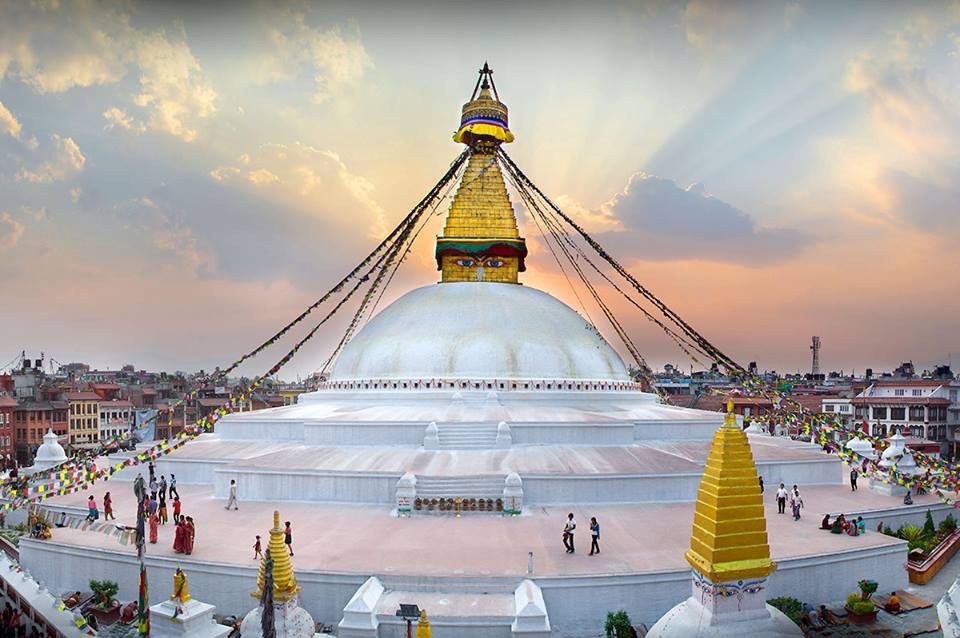 There is no single deity worshipped by Hindus and Buddhists in Nepal like Christians and Muslims. Actually, both Hinduism and Buddhism share many similarities in the way they offer prayer and the deities they worship. Hindus have numerous deities including Shiva, Brahma, Vishnu, Ganesh, Krishna, Ram, Hanuman, Sita, Saraswati, Laxmi, and Kali. These all deities represent their special features. Among numerous deities of Hindus, Shiva is considered to be the most powerful one who can take control over all Hindu deities. Similarly, Buddhists have Buddha and its different incarnations. 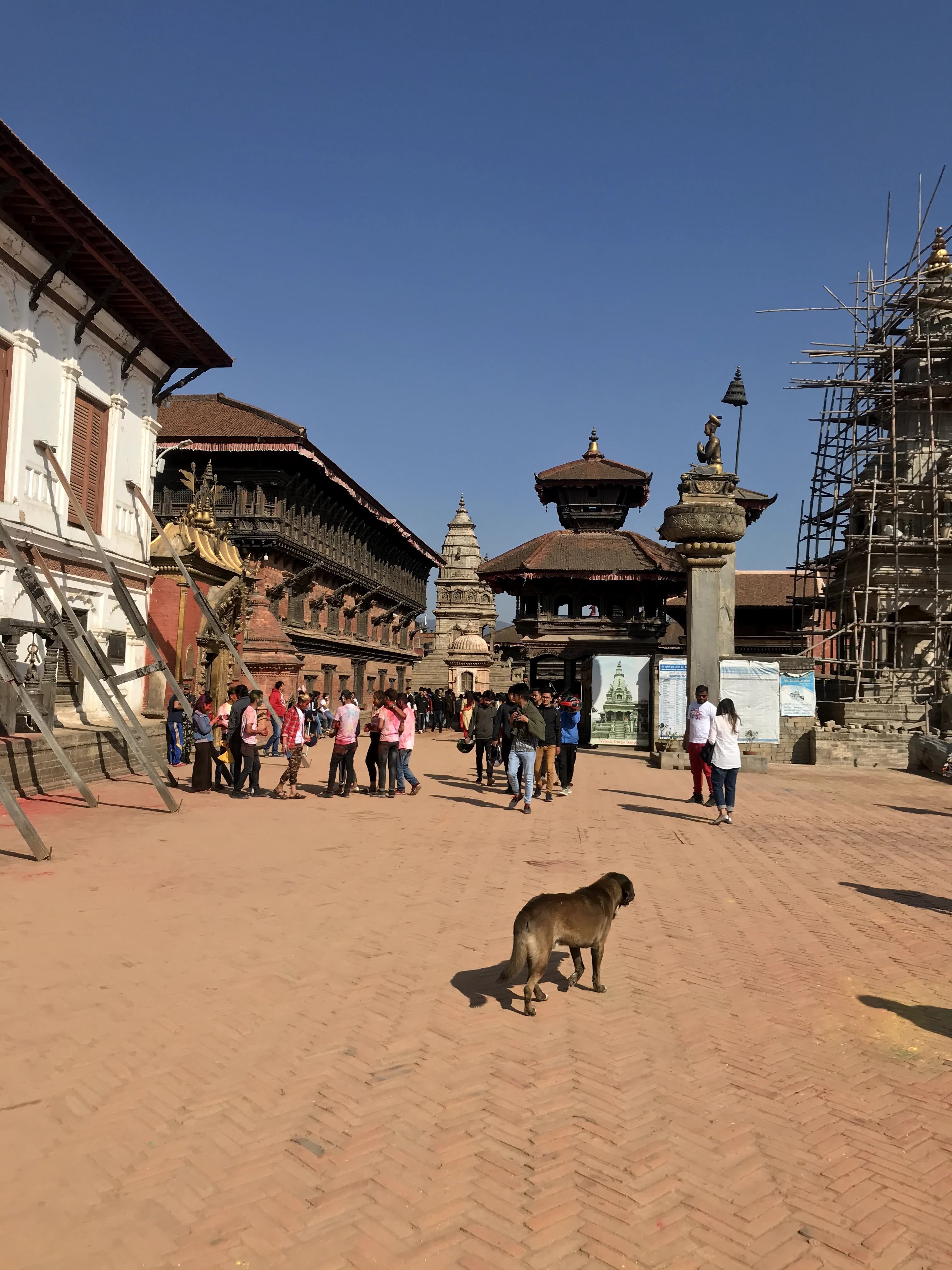 Nepal has a long-standing history of at least 11 thousand years old. The name of the country, Nepal has found mentioned in Veda and Upanishad which are thousand years old Hindu scriptures. Gopal Bamsa were the earliest people who lived in the Kathmandu valley. Kirat kings, Lichhabi, Malla, and Shaha kings ruled Nepal respectively for centuries.

Nepal encountered the Anglo-Nepal war between 1815-16. In this war, the British were defeated and they began to praise Nepalese as Brave Gorkhalis. Both parties: Nepal and Britain did Sugauli Treaty after that and the war ended.

Later, great king Prithvi Narayan Shah unified all fragmented kingdoms of Nepal into one Nepal in 1769. The autocratic Ranas ruled over Nepal for 108 years. In 1996, Maoist Party started a revolution to throw kingship and establish the republic of Nepal. The insurgency went on for 10 long years. In 2001, the royal massacre occurred killing the members of the royal palace including King Birendra. Maoist came into the peace process and a new constitution was declared which made Nepal known as the Federal Republic and a secular country.

Nepal was hit hard by the 2015 earthquake with a magnitude of 7.8. It brought terrible destruction across the country killing more than 1000 people. Still, some people are homeless. Langtang Trekking region was the most affected trekking region in Nepal by the earthquake. However, the Langtang region has revived back to its previous condition and there is no threat to the trekkers.

By the election held in 2017, Unified CPN emerged as the ruling party and it is in the government now.

We still can see the caste system in practice in Nepal. Actually, in developed cities like Kathmandu and Pokhara, the caste system is not deeply practiced but in the rural part of Nepal, it is strictly maintained. Even, untouchability still exists in rural parts of Nepal.

Before talking about the caste system in Nepal, it is necessary to talk about Vernas. Nepal is practicing 4 vernas. Actually, Verna is very similar to the task assigned. The major vernas of Nepal are

According to the 2011 census of Nepal, people speak 123 languages across Nepal. The languages spoken in the Himalayan region of Nepal differ from the languages spoken in Hill and Terai. However, the official language of Nepal is Nepali. Among the people of different castes and religions, a homestay tour/trek in Nepal is one of the spectacular ways of experiencing Nepal’s countryside. 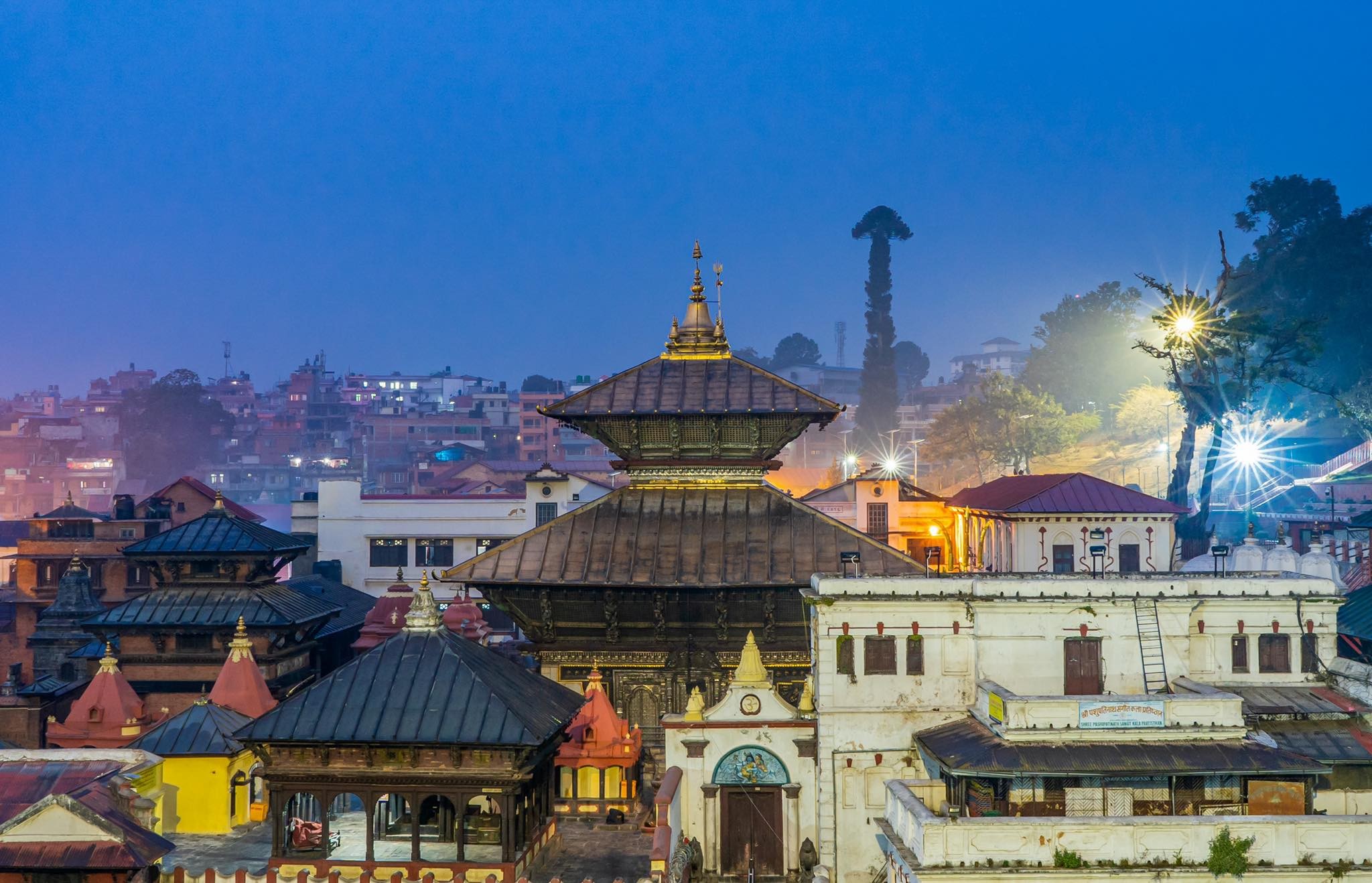 Among numerous cultural, historical, and religious heritage sites in Nepal, there are few magnificent sites that are listed in UNESCO World Heritage sites. 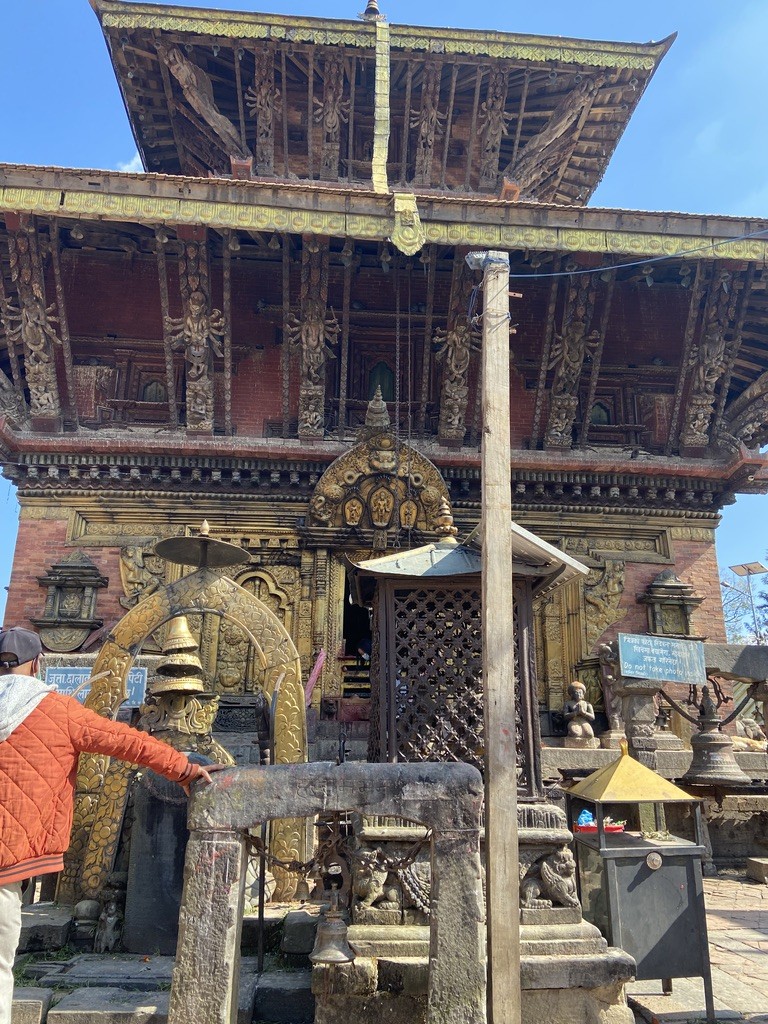 Trishuli, Budi Gandaki, Marshyandi, Seti, Bhotekoshi, Arun Barun, Rapti, Mahakali and Kaligandaki are the popular rivers in Nepal. Among these rivers, Arun and Barun are the rivers located at the highest elevation. All these rivers originate from the Himalayas of Nepal and Tibet. They have a large amount of water all around the year. And, few of them are very popular for river rafting in Nepal.

Nagarjun Jungle, Shivapuri Jungle, the jungle of Chitwan National Park, Jungle of Bardia National Park, Jungle of Langtang National Park, and the jungle of Annapurna Conservation Area are the most popular densely forested areas of Nepal. Diverse species of flora and faunas are found in these forests of Nepal. Nagarjun Jungle and Shuvapuri jungle are at the ride of Kathmandu valley. People love doing day hiking via these deep woods for the preparation of longer trekking and also for refreshment.

Nepal is popular as a Himalayan country across the world. Giant Himalayas make Nepal astoundingly distinctive among the nations in the world. Actually, Nepal’s Himalayas fascinate thousands of tourists every year which contributes largely to the national income. The most popular Himalayas of Nepal are: Everest, Loa Tse, Nupse, Pumori, Makalu, Langtang, Lirung, Rolwaling, Ganesh Himal, Manaslu, Annapurna massif, Dhaulagiri, Mardi Himal, Himchuli, Machhapuchhre, Kanchenjungha and many other snow-fed mountain peaks. In order to see these Himalayas in Nepal, people across the world make the various exciting and adventurous treks to the base camps or adventure enthusiasts also make expeditions to many of these mountain summits.

Numerous trekking points which take the trekkers to the base camps of major Himalayas or also take to the summit of these peaks are always famous among the trekkers. Let’s talk about each trekking point in detail.

Every ethnic community has different food items to celebrate. People eat different food items during their ethnic ceremonies and celebrations. However, the most common and the main food of Nepalese is Dal Bhat. Nepalese, at least, eat Dal Bhat twice a day. There are two types of Dal Bhat. The one is vegetable Dal Bhat and the other is Non-Veg Dal Bhat. Non-veg Dal Bhat is served with either mutton or chicken. Beef is not permitted to eat because Nepalese worship cow as goddess Laxmi, the goddess of wealth. But, in the restaurants of major cities like Kathmandu and Pokhara, we can get beef too. Buff is easily available to the interested. 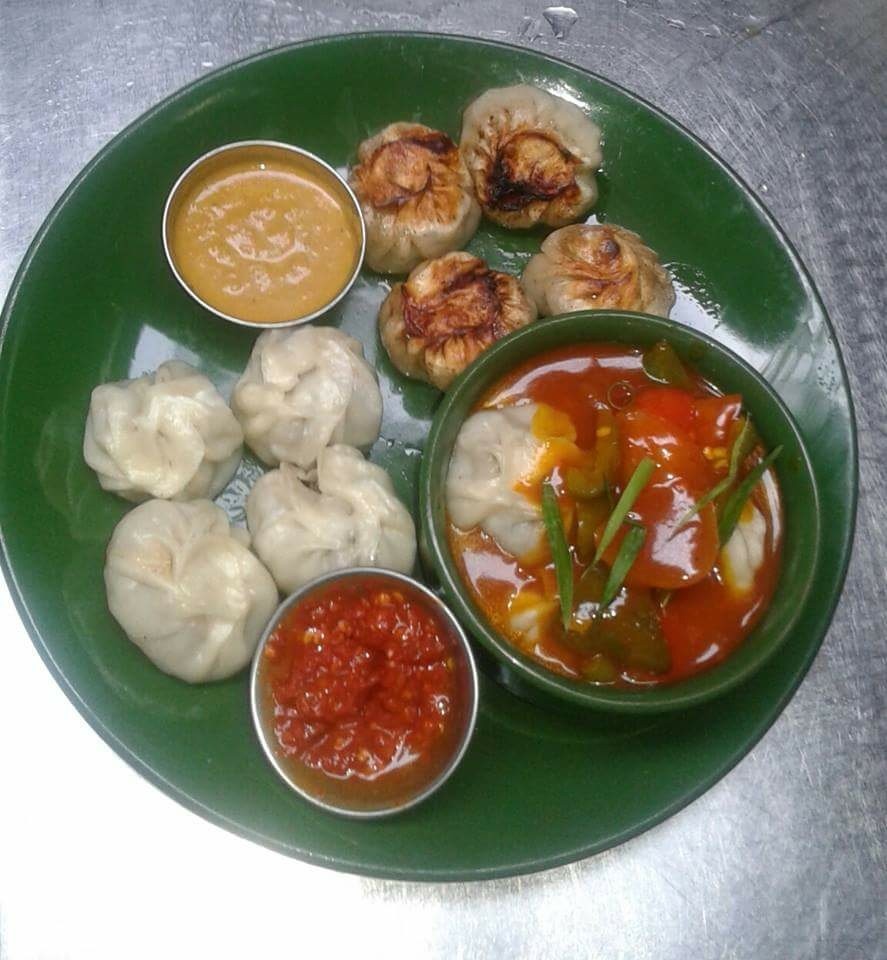 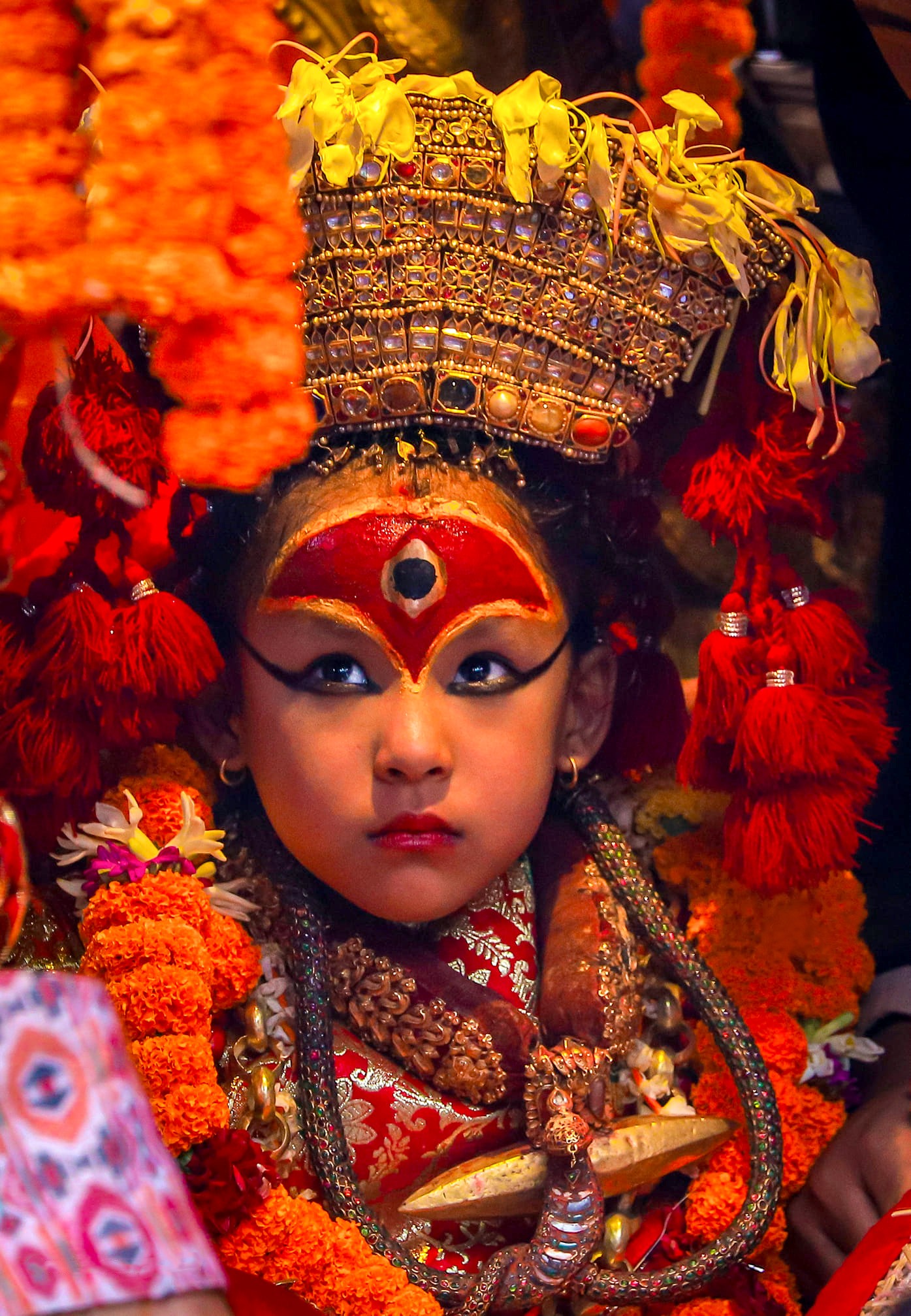 Living goddess ‘Kumari’ is the central attraction of Kathmandu Durbar Square. Actually, Kumari ( princess) is chosen for a day and worshipped occasionally. Living Goddess Kumari represents purity and chastity. Also, Kumari stands for energy. The history of keeping Kumari goes back to the Malla period. Since that time, Kathmandu Durbar square has continuously had Kumari.

In order to be Kumari, the girl has to be from the Newari community and prepubescent. According to Hinduism and Buddhism, those who worship Kumari will get the power to defeat the wrong.

Among four climatic seasons (Spring, Autumn, Winter, and Rainy), Autumn( Sep-Nov) offers the best weather for travelers in Nepal. Autumn receives no rain and snow even in the mountain. Trekkers/ travelers will get the finest weather of the year. We can capture a wide range of views of both landscapes and the mountain panorama during Autumn. Also, people are festive during Autumn. However, Spring( Mar-June) is also considered equally magnificent for traveling in Nepal. Relatively, spring is warmer than Autumn but we will have a perfect temperature in the mountain. Sometimes, we have rain during Spring but it is very rare. The most notable highlight of visiting Nepal in Spring is the flowering rhododendron on the trekking trail. So, people prefer Autumn to Spring as the best time to visit Nepal. 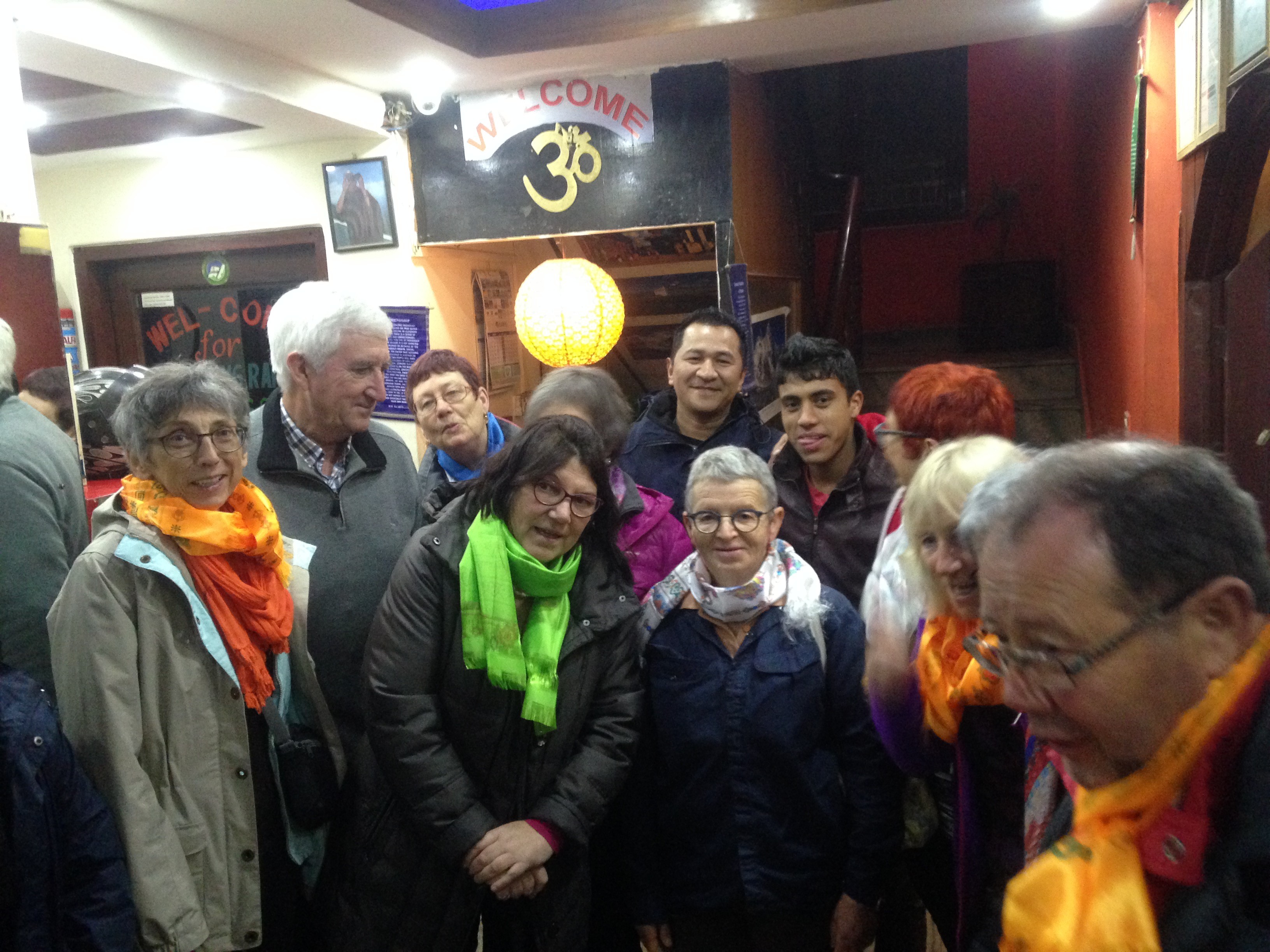 Whereas, Winter ( Nov-Feb) and Rainy ( June-Aug) are not taken as a good time to visit Nepal. The rain and the snowfall frequently disturb the trip during winter and rain.

Nepal is a landlocked country that is surrounded by two giant neighbors, China, and India. Nepal is multi-ethnic, multi-religious, multi-lingual, and multi-cultural with Nepali as its own language. This article will be helpful for you if you are planning to visit Nepal.